While cinema has always been considered the king of artistic visual storytelling, TV has definitely developed a worthy claim to the throne. With the best writers, best directors, best actors and best concepts all migrating to the small screen, few can deny the medium’s narrative power. However, no discussion about ‘peak TV’ is complete without discussing The Sopranos (1999 – 2007); a brilliant, groundbreaking saga which feels just as revolutionary now as it did 20 years ago. It was the first to really break through TV’s ceiling, giving us a show just as cinematic and thematically rich as the best films. Things have finally come full circle with The Many Saints of Newark (2021), the new prequel film to the famed show.

Part of what made The Sopranos so endlessly engaging was its unpredictability. Things would be set up, tension would build, and then the resolution would occur in a shockingly unexpected way. Even so, it all somehow made total narrative and thematic sense. One need only look at the show’s iconic and controversial final scene as proof of that, and that legacy has certainly left The Many Saints of Newark with big shoes to fill. Director Alan Taylor and writers David Chase and Lawrence Konner have delivered a film with a handful of jaw-dropping moments which definitely rank among the series’ best surprises, but for the most part The Many Saints of Newark lacks thematic meaning in most of these moments. This is a result of the filmmakers misunderstanding that an unpredictable plot doesn’t always translate into quality storytelling. Many shows and films have learnt the wrong lessons from The Sopranos’ success, and sadly that is also true here.

That aside, The Many Saints of Newark is not without its compelling story threads, as the focus on racial tension and on Dicki Moltisanti does give the film unique areas of analysis. The Sopranos was always at its best whenever it highlighted how the ignorance of the characters led to conflict, violence and tragedy, which is happily the case for Dicki’s arc. This is equally true of Harold, who offers an insightful and fresh perspective on a side of this hell-scape we have never seen before. Much of the film’s strongest and most thought provoking content rests on the battle between these two, culminating in an absolutely show stopping confrontation which rivals the iconic hotel shootout in No Country for Old Men (2007). It’s an incredible moment of sheer cinematic terror, which sadly also highlights the areas which are more lacklustre.

Instead of developing these new threads to their fullest potential, precious minutes are wasted on showing us what the young versions of our favourite characters from the show are doing. There was potential for high stakes drama, but nearly all of these instances fail to reveal anything we don’t already know. The show was so extensive with its world-building that it’s basically pointless to show us what the famous characters went through prior to the first episode. The interesting part of these people’s lives was the six seasons of television we already saw, so it would’ve been better to downplay their roles. This is especially frustrating considering many of the famous characters don’t actually have much utility for the story at hand.

With that in mind, you can feel the film’s narrative is being squeezed by the two hour runtime. These storytellers are more used to having roughly 13 hours to flesh our their story, meaning they can take their time, dig deep and allow things to breathe. On film, you need to get to the point much quicker, which The Many Saints of Newark struggles to do. For most of the runtime, the pacing is similar to that of the show, but the plot is nowhere near as complex. Therefore, we are actually left a little bored from scene to scene, as not much ground is covered until the final few minutes. You could pretty much cut out an hour and a half and not miss anything of importance. This is a far cry from the show, as even the smallest details were essential.

Despite all these faults, you can’t deny the cast are definitely giving it their all. Michael Gandolfini impressively melts into the iconic role first originated by his late father, bringing a real sense of poetry to the entire film. Jon Bernthal, Vera Farmiga and Corey Stoll are appropriately cast as Johnny Soprano, Livia Soprano and Junior Soprano, perfectly appropriating all the ticks and eccentricities of their famous characters. However, the standout performances are clearlyAlessandro Nivola, Ray Liotta,Leslie Odom Jr. andMichela De Rossi, once again proving that more time should’ve been spent on these newer voices and newer perspectives.

Whenever an Iconic film is adapted for TV, the common complaint is that the show fails to capture what made the film a classic. With The Many Saints of Newark, we’ve now come full circle, as this is an example of a film that fails to capture what made the show a classic. There’s definitely genius in here somewhere, but it’s buried beneath its own references and callbacks, all of which prevent the film from going in new and exciting directions. Even though it’s handsomely made and clearly has the best intentions, The Many Saints of Newark may just disappoint diehard fans and it’ll make newcomers wonder why the show is so iconic in the first place.

Best way to watch it: While eating Capicola (known in the show as ‘Gabagool’). 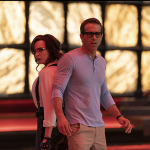 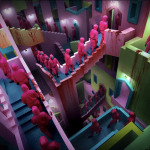