There was once a time when Westerns were the most prominent genre in all of cinema. Filmmakers like Howard Hawks, John Houston and (of course) John Ford ruled the silver screen with instant classics like Rio Bravo (1959), The Treasure of the Sierra Madre (1948), and The Searchers (1956). When the genre started to feel stale, Sergio Leone revitalised things with his far edgier films, A Fistful of Dollars (1964), For a Few Dollars More (1965), The Good, The Bad and The Ugly (1966) and Once Upon a Time in The West (1968). Since then, westerns only survive if they mix up the formula, as proven by Unforgiven (1992) and Django Unchained (2012). It’s a shame that traditional westerns are considered dead, as the right filmmaker could make this old genre feel new again. As it happens, Jeymes Samuel is that filmmaker, and he has given us the thoroughly entertaining The Harder They Fall (2021).

Set sometime during the 19-Century American West, we are introduced to Nat Love (Jonathan Majors), an outlaw who leads a gang consisting ofJim Beckswourth (RJ Cyler), Will Pickett (Edi Gathegi), Mary Fields (Zazie Beetz) and Cuffee (Danielle Deadwyler). Following their robbery of a rival group, The Nat Love Gang discovers that infamous criminal Rufus Buck (Idris Elba) has been sprung from prison by his underlings Trudy Smith (Regina King) and Cherokee Bill (Lakeith Stanfield). This is of particular significance to Love himself, as Buck murdered Love’s parents 20 years earlier. Now out of prison, Buck resumes his reign of terror, prompting Love, his gang and US Marshall Bass Reeves (Delroy Lindo) to bring him down.

As the film opens, we are treated to the following words: “While the events of this story are fictional… These. People. Existed.” It’s a provocative statement which immediately snaps the viewer to attention. For the last 120 years, audiences have become accustomed to white-washed depictions of the American West. Granted, Quentin Tarantino’s modern classic, Django Unchained shed light on previously ignored sides of the time period, but it arguably continued to perpetuate the belief that there were no persons of colour outside of the slave system. The Harder They Fall puts a stop to that, delivering a fantastic ensemble of engaging, compelling and enjoyable characters, all of which are based in fact. Yes, director/writer Jeymes Samuel is doing a bit of historical revisionism, but unlike other westerns he’s using his revisionist take to bring some truths to life.

On that note, to say that Samuel has brought this world to life almost feels like an understatement, as it’s brimming with seemingly boundless energy. From scene to scene, Samuel holds our attention with a mix of breathtakingly composed cinematography, tangible production design and confidentially assured direction. The best westerns have always used strong visuals as a narrative device, and The Harder They Fall lives up to the genre’s legacy. Seeing real sets, grand locations and sweeping vistas is a real treat, as it delivers both a strikingly colourful and wonderfully gritty experience. While all of these elements contribute immensely to the film’s rewatch value, it’s the incredible soundtrack which seals the deal. Samuel uses his own original compositions as a key storytelling tool, perfectly pairing every note with key edits, plot turns and thematic points.

Additionally, the script excellently captures the narrative’s emotional grandeur. To be clear, this isn’t to say it’s a particularly serious or heartfelt story, only that it feels powerful and expansive. Tonally speaking, The Harder They Fall is fun and sleek, yet that doesn’t stop the viewer from growing attached to various character arcs. Just like classic westerns, the plot itself is fairly simple with broadly drawn heroes and villains, but by the time the climax rolls around you feel like you’ve come to know and understand all of their complexities. Thus, the explosive final standoff really feels like the culmination of an epic, high stakes journey. Leone’s The Good, The Bad and The Ugly still has the crown as far as grandiose endings are concerned, but the fact that Samuel manages to inject a similar sense of scale is impressive.

Outside of these classically artful touches, Samuel doesn’t skip over the film’s sheer entertainment value. The narrative may be dark, tense, violent and Shakespearean, but that doesn’t stop it from being a thoroughly enjoyable ride. Like the westerns of old, The Harder They Fall is an almost perfect piece of escapism with fist-pumping action set pieces, all packed with gleefully cheeky updates of the genre’s iconic tropes. From shattered glass, to quickdraw gun fights, to great train robberies, this is a popcorn actioner which could bring the house down for a willing crowd. While plenty of action films can claim to be fun, The Harder They Fall reaches greater heights by being effortlessly cool.

With that in mind, The Harder They Fall could be seen by some as a case of style over substance. While this is often considered a negative when it comes to complex storytelling, it’s exactly what this film needed. Westerns by their very nature are stylish, and the genre’s tropes have been formed to fuel that style. Samuel is completely aware of the formula and uses it to its fullest potential. On a narrative level, no rules are broken, no traditions are upended and the structure adheres to the classic format. There’s no grand allegory, nor is there any social commentary, which ironically is the point of the entire piece. These characters and these perspectives have been locked out of this genre for a long time, meaning their stories are forever chained to certain historical backdrops. The best social statement imaginable has been made by simply untethering from those restraints and just letting this western be a western.

When looking at the data, it’s clear The Harder They Fall hasn’t exactly set the world on fire. Despite it’s positive reviews as well as its position as a big ticket Netflix release, it hasn’t made the stir it rightly deserves. Maybe it’s still too soon for the western to come back in full force, but when it does, expect Jeymes Samuel’s film to go down in history as a wonderful hidden gem.

Best way to watch it: On repeat. 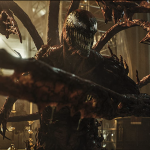 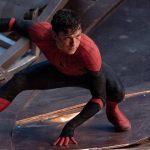