Most audiences have a complicated relationship with arthouse cinema. We love to see original things and have new experiences, but it can be downright frustrating when the experience is barely recognisable as a story. If the audience can’t follow what they’re watching, it’s difficult to feel an emotional connection. The fact that most movies are franchises, sequels or recognisable properties is irrelevant. It’s all about how the events, stories and characters are portrayed. If the unconventional filmmaking is too far removed from comprehensible emotion, the artistic merits seem pretentious. Every arthouse film walks a fine line between creating new ideas and creating an emotional experience. Director Carlo Mirabella-Davis’ debut feature, Swallow (2020), successfully walks that line.

The story follows Hunter Conrad (Haley Bennett), the wife of Richie Conrad (Austin Stowell), a rich heir of a corporate fortune. Hunter wants for nothing and no longer needs her dead end job. However, this is all a facade. Hunter feels no happiness and is just trying to appease Richie and her in-laws. Upon falling pregnant, Richie and his parents tighten their grip on Hunter, only giving the kind of love a farmer gives their sheep. Meanwhile, Hunter exhibits a rare compulsion to eat non-nutritional objects such as marbles, nails, pins and garden dirt. She begins to feel a strange sense of excitement and power with every object she consumes and continually does it in secret. This disturbing habit sends her on a path of self-discovery which breaks her down, but also helps her grow.

The entire narrative revolves around Hunter’s journey, so it was of paramount importance to find an actress capable of carrying the dramatic load. Thankfully, Haley Bennett is more than up to the task, stealing the show with her incredible talent. Bennett has a kind of classical charm in common with legendary performers like Grace Kelly, Eva Marie Saint and Shirley MacLaine. The most subtle line readings, mannerisms and actions are richly layered, displaying complex depths of loneliness disguised by perfection. Even though Bennett shines brightest, she is surrounded by a formidable supporting cast, including Austin Stowell, Elizabeth Marvel, David Rasche, Laith Nakli, Lauren Vélez and Denis O’Hare. O’Hare in-particular brilliantly carries the weight of a socially complex climax.

These aren’t the most naturalistic performances, yet they are very deliberately (and appropriately) shaped to Director Carlo Mirabella-Davis’ unnerving vision. Despite this being his first feature film, Mirabella-Davis’ has crafted a haunting world on par with the likes of Stanley Kubrick’s Eyes Wide Shut (1997). The story follows simple domestic life, but every moment which would normally be uneventful or innocuous is magnified, allowing the audience to see the cracks in this seemingly perfect marriage. Mirabella-Davis doesn’t need to throw in unnecessary melodrama to make the lingering darkness clear. Even story turns which traditionally become dark and depraved are treated with soulful and psychological honesty. At its most dramatic, Mirabella-Davis easily avoids overcooked theatrics.

Communicating thematic layers with a minimalist approach isn’t easy, as it can result in the story and characters feeling thin. Many arthouse films compensate for this with a long runtime. This is so the filmmaker can gets all his or her thoughts on screen. Amazingly, Mirabella-Davis expertly develops monumental levels of narrative heft with only 92 minutes to work with. Every sequence only plays for a few short minutes, yet they all start and end with carefully chosen story points. After every time jump, the viewer is armed with knowledge and feelings to take into the next carefully constructed sequence. These moments speak volumes and tell us important things about the plot, character motivations and emotional weight. No moment is lingered on longer than needed, as everything is purposeful, pointed and clever.

Even with the delicate construction, the film isn’t lacking terrifying content. Hunter’s disorder creeps up on the viewer to such a degree that it’s silently horrifying. The deeper we get into the story, the more shocking her transformation is. What’s most impressive is that we start to encourage her compulsion even though it repulses us. Her journey is directly intertwined with the passive oppression she endures from the people around her. Under normal circumstances, a family keeping someone under control to cure a dangerous habit would be sympathetic, but Mirabella-Davis brilliantly flips everything on its head. The key to this trick is connecting the plot mechanics to a thematic point. Ultimately, this bizarre story conveys the message that no one has the right to control your purpose or your body. Once all the pieces are in place and the film reaches its climax, the metaphorical point is unmistakable.

Arriving to such a complex point requires some complex social issues to be addressed. Thankfully, Mirabella-Davis is a smart filmmaker and is aware of the implications his story is making. He’s not afraid to shine a light on certain topics, as he knows it’s unavoidable. With that in mind, it’s treated with delicacy and isn’t trivialised. There’s an opportunity to provide an easy answer and to turn a key character into a complete villain, but Mirabella-Davis understands that real life isn’t as simple as that. For some viewers, the touchy nature of the ending might leave a bad taste in the mouth. Additionally, viewers who got wrapped up in the unnerving build-up might think it’s an anti-climax, but the power of this final moment is undeniable.

As far as artistic films go, Swallow (2020) is rather accessible which may disappoint fans of the style. However, the clean structure and delicate storytelling allow the experimental aspects to be universally appreciated and completely engaging. Mirabella-Davis’ gorgeous direction is perfectly matched by Haley Bennetts’ captivating performance, creating a story which says so much without ever needing to shout about it. When Mirabella-Davis transitions into larger films, the results will surely be spectacular. It’s not going to be for everyone, but if you’re looking for something a little different, Swallow (2020) should not to be missed.

Best way to watch it: Please do not eat marbles, nails, pins and garden dirt. Stick to popcorn. 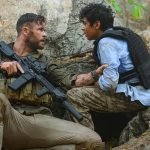 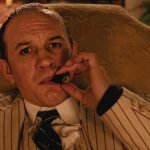