This is retrospective discussing the production, influence and overall quality of Top Gun (1986). With Top Gun: Maverick (2022) approaching release, it’s the right time to take a look back at how we got here, examining the highs and lows of the seminal classic.

Throughout cinematic history, there are very few films which immediately permeated our collective consciousness. Obviously, studios and filmmakers fight tooth and nail to produce these kinds of hits, but you can never predict what’s going to make an impact. On paper you’d assume seminal works of art are the ones that last, but in truth the great, memorable and iconic films are rarely flawless. The Dark Knight (2008) elevated the superhero genre despite the plot’s logical loopholes, Terminator 2: Judgement Day (1991) hit action fans in the heart despite breaking its own narrative rules, and Raiders of the Lost Ark (1981) felt grand and epic despite not having anything substantial on its mind. From this perspective, it’s amazing how Top Gun’s (1986) messiness actually contributed to why it’s so beloved.

Following the release of his film The Hunger (1983), director Tony Scott was starting to gain the attention of big time Hollywood producers. Jerry Bruckheimer and Don Simpson were looking to make a film out of Ehud Yonay’s California magazine article, ‘Top Guns’, which detailed the life of fighter pilots at a Naval Air Station. The pair approached Scott to direct the film, but he was somewhat hesitant due to the mixed reception he had received on the earlier project. However, Scott eventually relented, seeing Top Gun as his way into the Hollywood mainstream. Even so, this wasn’t going to be an easy task, as the modest $15 million budget meant that Scott had to choose between spectacular effects or big name stars.

In order to create the necessary thrills, it was more important to direct that cash towards the film’s aerial action sequences. These weren’t model planes filmed against rear-screen projectors, but rather real fighter jets filmed on location. Not since Hells Angels (1930) had there been a film which captured the genuine shock and awe of aerial combat, resulting in Top Gun’s dogfight scenes immediately being heralded as the best in cinematic history. Regardless of whatever else the film had to offer, Scott’s insistence on practical effects paid off in spades, as Top Gun is widely regarded as one of the most iconic action films ever made. This is especially fascinating when you consider that Top Gun doesn’t have a traditional villain, plot, or clear stakes for the majority of the runtime.

This is part of what makes Top Gun such a fascinating artefact, as there’s actually very little action in this action movie. Following an effortlessly cool and nail-bitingly exciting opening, almost the entire middle stretch focuses purely on Maverick’s (Tom Cruise) various arcs, whether that be his rivalry with Iceman (Val Kilmer), his friendship with Goose (Anthony Edwards), his love affair with Charlie (Kelly McGinnis) or his mentorship with Viper (Tom Skerritt). This is the backbone of what makes Top Gun so entertaining, as we are constantly jumping between different tensions, scenarios and tones. One minute we are feeling threatened by Iceman, the next we are feeling the heat between Maverick and Charlie. Almost all of these moments are informed by the characters’ enjoyable interpersonal relationships, but this didn’t stop it from receiving criticism for the same reason.

For such a successful and culturally ubiquitous film, it’s curious to note that Top Gun received (and continues to receive) mixed reviews from professional critics. common critiques often point to the film’s narrative aimlessness, the widely schizophrenic tone and the apparent lack of satisfying payoff for everything it sets up. While there is definitely truth to all of these notes, none of it has done significant damage to the film’s long lasting reputation. If anything, all the moments which contribute to the film’s flaws equally contribute to its memorability. From the volleyball match, to the 4G inverted dive, to the piano, to the love scene, Top Gun’s disconnected series of events helped to make every scene stand out on their own terms. In this way, Top Gun succeeds in being a collection of wildly entertaining pieces. This even extends to the young, up-and-coming cast, all of whom aided in elevating Top Gun above the negative criticism.

It’s hard to imagine now, but back in 1986 Tom Cruise wasn’t Tom Cruise. Instead, he was ‘that kid from Risky Business (1983)‘, which was a huge hit, but it’s fair to say that Cruise was still an up and comer at that point. His status as an A-lister wasn’t yet cemented, nor was his signature persona as the capable, confident, yet emotionally complex hotshot (which describes many of his iconic performances). From this perspective, his role as Maverick in Top Gun not only catapulted him to superstardom, but also set the template for what a typical Tom Cruise character was. Cruise wasn’t the only young star whose career was defined by Top Gun, as Val Kilmer, Anthony Edwards and Kelly McGinnis are still inextricably linked to the film’s legacy. Even Meg Ryan owes her fame to Top Gun, as her small appearance placed her in the blockbuster conversation.

If it’s not clear, ‘blockbuster’ is the only word you can use to describe Top Gun. The confluence of elements should’ve resulted in it being the subject of mockery (which it is) but instead it ended up being a film which connected with almost every demographic in one way or another. The planes spoke to action fans, the corniness gave it a comedic edge, the drama gave it a heart, and the sexiness spoke to people of all orientations. Top Gun was the kind of success which you don’t really see too often anymore, as it broke through into the cultural lexicon practically overnight. Lines such as”I feel the need for speed” or “you can be my wingman anytime” felt likes they’d been around as long as Gone with the Wind’s (1939) “frankly my dear, I don’t give a damn”, or Citizen Kane’s (1941) “Rosebud”. Its success was so immediate and so pervasive that (to this day), its popularity completely eclipses any imperfections it may or may not have.

This all raises the question as to whether or not Top Gun deserves its status as a modern classic, and what that status says about the audiences who embraced it. Academics may say that this messy and cheesy film being a success would reflect badly on our viewing habits, but in truth Top Gun is proof of something much more profound. Top Gun is proof that cinematic greatness has nothing to do with perfect scripting, perfect direction, perfect structure or perfect artistry. A great film can achieve greatness purely on how it makes you feel, and the fact that Top Gun made audiences feel good achieved it in spades. Tony Scott delivered a rollicking good time which can be watched on repeat, which is something that can’t be said for so many supposed ‘better’ films from the era. It never felt like Top Gun needed a sequel, yet in a few days we will be given one. Let’s hope it will take our breath away when we return to the danger zone. 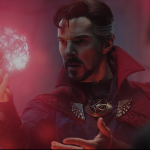 Doctor Strange in the Multiverse of Madness (2022) Review 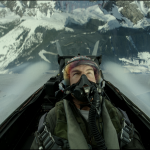