Sometimes I wonder what it was like to be a cinema goer in my parents’ day. Don’t get me wrong, I am old enough to remember when cinemas weren’t just filled with franchise movies, however I wasn’t around for the days when you’d just walk into a theatre not knowing what you were in for. These days everything is a sequel or part of some cinematic universe. We go in having pretty solid theories and expectations, both are often correct. I love Marvel films as much as the next person, but franchise filmmaking has made original films increasingly rare. So I was elated when I walked in to see Ready or Not, a wholly original horror-comedy which has the potential to become a cult classic, but will likely become the first of a franchise, unfortunately.

Directed by Matt Bettinelli-Olpin and Tyler Gillett from a screenplay by Guy Busick and R. Christopher Murphy, the film stars Samara Weaving as Grace, A girl-next-door type who has just tied the knot with her boyfriend of 18 months, Alex Le Domas. Now a part of the eccentric and scarily rich Le Domas family, Grace has to take part in the family tradition of playing a game after her wedding, with Hide and Seek being the chosen game (Grace hiding and the family seeking). However, each seeker is armed to the teeth with rifles, axes, crossbows and more. Their mission is to find and kill Grace before the sun rises. In more ways than one, it is Hide and Seek from hell.

With a premise as bizarre as that, its hard to imagine anyone who wouldn’t be a least a little curious to see what follows. Naturally, Directors Bettinelli-Olpin and Gillett infuse the film with enough bloody action to make Mel Gibson proud. Each kill shot makes you wince and in turn ratchets up the tension. What makes the whole thing so gleefully enjoyable is how brilliantly the tone is balanced. As the bullets fly and the blood splatters, you’ll be covering your eyes one moment and laughing the next. In some cases at the same time.

It’s not easy juggling intense violence and laugh-out-loud comedy. One wrong choice and the whole film becomes distasteful. The similarly-themed film The Hunt was denied release for that very reason. In contrast, Ready or Not emerges as a far more intelligent piece. Sure, the theme of rich vs poor could be more fleshed out and the third act story twists may be questionable to some, but the clever direction and breathless script do enough to iron out the kinks. Not only is the viewer allowed to happily revel in the thrills, but Bettinelli-Olpin and Gillett even manage to play with genre conventions to a surprising degree. I don’t think I’ve seen set ups and payoffs done in quite this fashion before. You’re baited into expecting one insanely violent scenario, yet what pays off is a completely different one. The insane hilariousness of it all is never lost on the audience, yet it’s played 100% straight by the the filmmakers and performers.

As far as performances go, there is no weak link. The supporting cast comprised of Mark O’Brien, Henry Cherny, Andie MacDowell, Melanie Scrofano, Kristian Brunn, Nicky Guadagni, Elyse Levesque and John Ralston all have a moment to shine. Even with a slight imbalance regarding who gets the most to work with, each cast member manages to have a handful of memorable moments, whether that be snorting mountains of cocaine in preparation for the game or surfing the web while casually holding a crossbow. Allowing this great ensemble to bounce off each other is where most of the humour lies.

We laugh while we watch this group of snobs try and fail to operate weapons they’ve never once used. Each resulting injury is not only shockingly gory but also a comedic gem. There’s no one here who has fanged their teeth in preparation (The Hunger Games, anyone?). Imagine if your sheltered friend was handed a gun and told to go hunting. There is something darkly comical about that image, and this cast milks every ounce of that image to great effect.

The standouts are The OC’s Adam Brody as Daniel and Samara Weaving as Grace. Adam Brody perfectly downplays Daniel’s alcohol-fuelled rebelliousness with enough subtlety that you’re not entirely sure of his allegiances. He doesn’t so much chew the scenery as invite you to feel sympathy. You relate to his feeling of being trapped by his family even when devoted to them. However, it is Samara Weaving who comes out as the MVP. A believable transformation from girl next door to total badass is not easy to pull off, especially when the story only takes place over one night. Yet Weaving achieves this feat effortlessly, calling to mind the likes of Alien’s Sigourney Weaver and The Terminator’s Linda Hamilton. Like those earlier icons, I’m sure the character of Grace Le Domas will be a popular Halloween costume in years to come. Needless to say, Samara Weaving will probably be a superstar in a few short years.

Even if all the pieces didn’t create a highly enjoyable watch, I would still have gotten satisfaction out of seeing a film which tried something new. A principle cast of semi-recognisble character actors and relative unknowns is always a nice change from the usual run of famous faces. The fact that it is a big swing which hits just makes it all the more satisfying. However, Bettinelli-Olpin and Gillett create such a rich little world that you just know the studio Fox Searchlight will want to create a cinematic universe out of it. The temptation is too great, especially with its $56 million box office against its $6 million budget. That’s an impressive haul for such a small movie.

Even with the inevitable franchising of Ready or Not, for now I am ecstatic that I have an inventive, funny and thrilling little movie which I will surely watch over and over for years to come. When you’re next at the cinema and are choosing between the Zombieland sequel or the Terminator reboot, take a risk and see Ready Or Not. Who knows, maybe I’m wrong and the lesson Hollywood will learn is that they need to make more films with fresh voices and new ideas. Unlikely, but I can dream, damn it.

Best way to watch it: In the cinema on date night. 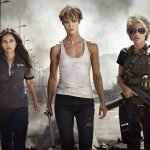