We may love the thrills of an action film or the laughs in a comedy, but there’s still a sense of unreality due to the heightened escapism. Carefully constructed dialogue, artfully rehearsed staging and colourful direction come together to create that cinematic sheen. This is what separates narrative storytelling from the uncontrolled reality of documentary storytelling. With all that in mind, there’s a sub-set of narrative films that try to remove the theatrical flourishes, instead opting to feel as close to reality as possible. The results can be startling, as films usually pack the biggest punch when they feel real, with characters who feel believable. Chloé Zhao’s Nomadland (2020) is one such example.

Based on Jessica Bruder’s 2017 non-fiction novel, Nomadland follows the story of Fern (Frances McDormand), a middle-aged woman who has just lost her job following the collapse of the US Gypsum Plant in Nevada. She and her husband had worked there for many years, but sadly Fern has recently been widowed. This prompts her to sell off most of her belongings, buy a van and travel around the country in search of seasonal work. Upon meeting Linda (Linda May), Fern discovers a community of fellow nomads all living in Arizona, who teach her basic survival and self-sufficiency skills for life on the road. This journey puts Fern on an existential path, as she examines her place in the world, where she has come from and where she’s going.

Films made in this particular style are often referred to as ‘Cinéma vérité’. This basically describes films that borrow the naturalistic traits of documentary filmmaking and funnel it through a fictional lens. To be clear, this isn’t the same as a mockumentary, which stylistically passes off fictional stories as if they’re documentary stories. Due to the unvarnished presentation, Cinéma vérité looks as though it’s easy to pull off. However, this is far from true, as it can appear uncontrolled and artless if not handled correctly. Thankfully, director Chloé Zhao has both hands on the wheel most of the time, as she doesn’t let this seemingly uncontrollable style get away from her. Even with improvisation, minimalism and naturalism, Zhao clearly has a method to her storytelling, delivering many moments which deepen the story.

Thematic depth is definitely the film’s core goal, given that majority of scenes are geared towards unpacking the journey’s layers. If there’s a chance to show the viewer how something we take for granted is of paramount importance to those who have nothing, then you can be sure Zhao will show it. When we break a dinner plate we just grab another one, as opposed to Fern who will spend the night gluing her one dinner plate back together. These moments constantly highlight how good we have it, while also putting things into perspective by showing all the little joys Fern and the nomads have. It’s genuinely powerful to see how they find happiness, enjoyment, friendship and knowledge, despite being removed from what we consider a normal state of living.

The storytelling is rich with authentic life, but sometimes the cinematography accidentally falls into unnecessary theatricality. Granted, the camerawork by Joshua James Richards is constantly beautiful, but the thematic intentions are sometimes at odds with the visual choices. We are treated to many shots of gorgeous realism, only to then pivot to a helping of slightly staged landscape shots. While these moments are stunning to behold and exquisitely rendered, they do pull you out of the story’s grounded reality, as they can’t help but elevate the material to an unestablished level of theatricality. In the worst cases, this can make the visual symbolism feel thematically shallow, but thankfully it mostly avoids dropping to that level. More often than not, Richards’ work compliments the film’s narrative intentions.

The narrative itself is (almost by default) genuinely sweat and emotionally resonant. We are greatly humbled by how sobering Fern’s existence is, thus causing us to be in her corner when her choices are questioned. We gradually feel a kinship with her as her journey progresses, eventually culminating in our total belief in her convictions. Not only that, but we are given a direct line into all the characters soulful wisdom, as the film poignantly builds to its conclusion. If there’s a drawback, it’s that things do take a bit longer than necessary to get going. Even with a relatively short runtime, it can feel like it’s taking a bit long to arrive at a point. The wait is mostly worth it once it gets there, but the build up may be a little too dry for those used to more dramatic proceedings.

Regardless, the leisurely pace isn’t too much of an issue, as Francis McDormand is there to pick up the slack. It’s no secret that McDormand is one of the best actors working today, having already been nominated for five Academy Awards and won two. Over her nearly 40 year career, McDormand is still at the top of her game with no signs of slowing down. Her work here indicates that she’s definitely got another few decades in her, as her ability to display subtle psychological complexity remains unmatched. Her work as Fern is especially impressive considering she has to match the authenticity of her co-stars, many of whom aren’t actors. You’d think the experienced actor would easily eclipse the regular people, but the Cinéma vérité style can make professional actors seem too theatrical. This is easily achieved by McDormand, nor is it a problem for David Strathairn in the role of Dave.

It’s unsurprising that Nomadland has been a critical darling throughout the recent festival and awards season. Chloé Zhao masterfully creates art out of a style of filmmaking which precludes artistic direction. Francis McDormand focuses all of her talents towards a role that will (arguably) be remembered as one of her greatest performances. Despite certain elements preventing it from being an all time classic, the praise it has received is justified given the powerful storytelling.

Best way to watch it: Sitting next to a roaring fire. 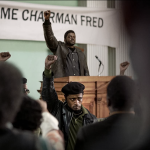 Judas and the Black Messiah (2021) Review