The iconic Disney Renaissance of the 1990s was quite a monumental time. Starting with The Little Mermaid (1989), the studio released a series of hits which changed the world of animation. Disney has always been at the forefront of family entertainment, but it was the groundbreaking string of films including Beauty and The Beast (1991), Aladdin (1992) and Lion King (1994) that catapulted their their output into the highest artistic regard. This unprecedented hot streak had such a lasting impact on cinematic culture, which is probably why Disney is having a tough time moving past it. Many of those films have been remade in live-action with mixed results. Of all the animated classics, Mulan (1998) had the most potential for an interesting redo. With that in mind, acclaimed director Niki Caro dives headfirst into her interpretation of Mulan (2020).

Set in the Northern Wei era (386–535), China is under attack from the Rourans. To fight the invaders, The Emperor (Jet Li) commands that one man from every family must join the Imperial Army. Meanwhile over in a quiet village, we are introduced to Hau Mulan (Liu Yifei), the eldest daughter of war veteran Hua Zhou (Tzi Ma). Most young girls in the village are learning how to be dutiful wives, but Mulan is more interested in being a warrior. Her skills are beyond measure due to her ability to harness chi (a universal life force), which her father warns her to hide as it’s forbidden for women. Mulan does her best to accept this, but when her father is called to join the army, she secretly dons his armour and pretends to be a male, thus joining the fight in his place.

There have been many films based on ‘The Ballard of Mulan’, so it’s important to note that this version is still primarily an update of the 1998 cartoon. Like many of the Disney animated films (and their remakes), the original was a musical as well as an action-adventure. Caro ditches the musical element, opting instead to direct Mulan as a Wuxia film. Wuxia is a genre of Chinese fiction which literally translates to “martial heroes”. As the name implies, these stories follow skilled martial artists as they fight for a righteous cause against oppressors. These heroes usually originate from a lower social class and rigidly follow codes of chivalry, honour and truth. As a Wuxia film, Mulan ticks all of boxes and shows that Caro has a genuine love for the genre.

The most prominent visual feature of the Wuxia genre is the action sequences and fight choreography. The heroes and villains battle with near superhuman strength and reflexes. They run, jump and glide on everything from walls, water and wind. Mulan’s seemingly magical action direction is affectionately inspired by traditional Wuxia films like Dragon (2011), The Forbidden Kingdom (2008), House of Flying Daggers (2004), and Hero (2002). It is a wholly unique style of filmmaking which is rich with history. Western audiences were largely first introduced to Wuxia with Crouching Tiger, Hidden Dragon (2000), but the genre has thrived long before that with films like Come Drink With Me (1966) and One-Armed Swordsman (1967). While all of this might seem irrelevant, it is key to understanding the strength of this creative decision and why it works in Mulan‘s favour. Sadly, it’s also key to understanding why the main story doesn’t completely work.

The character of Mulan fits the prerequisites for Wuxia cinema, so the idea of retooling the Disney version to be a martial hero is theoretically genius. This was probably also the reason why the concept of ‘chi’ was introduced, as the ability to harness an energised life force narratively justifies the mystical action sequences. Regrettably, this decision makes this new version lack what made the original so compelling. In the cartoon, the drama was centred around a courageous character who achieves greatness through her bravery, wits and refusal to give up. This new version is centred around a character who is already gifted due to her inborn superhuman powers, which she eventually chooses not to suppress. She’s already a great warrior before we meet her, so her transformation isn’t as inspiring as it should be. The intended message about not hiding who you are is definitely genuine and is part of the cartoon’s thematics, but Mulan’s naturally unrivalled chi makes her journey of becoming a great warrior feel unnecessary.

This keeps the viewer at arms length, as we are no longer on the journey with Mulan. We are left just waiting for her to use her skills to their full potential. It’s not impossible for this kind of arc to work. The trick is to make the story more about the world reacting to the perfect protagonists existence. Films like Superman (1978), Captain America: The First Avenger (2011) and Wonder Woman (2017) pull this off seamlessly. In addition to being a martial hero, this film’s characterisation of Mulan is somewhat similar to that of a superhero, so it’s perfectly reasonable to have the narrative play out like a superhero story. Instead, the major beats of the cartoon remain largely unchanged, meaning the dramatic context hasn’t been updated to fit this film’s characterisation of Mulan. This results in many moments feeling thin and thematically confused, whereas they should’ve carried intense emotional weight.

It’s fair to say that nostalgia for the animated version could be the reason for a viewer’s disappointment, but it’s possible that the filmmakers own nostalgia for the original is what held this film back. Caro has created a visually stirring experience on an epic scale, while still keeping those important beats from the cartoon. Even so, the new additions don’t add much, thus only making it feel needlessly long. Remember, the cartoon had a narrative which only sustained a 90 minute runtime. There’s plenty of new content, but very little adds anything substantial. The new characters and plot threads are given conclusions to their arcs, but the sequences meant to develop those stories feel more like obligatory scenes added purely to fill a two hour runtime. These new moments could’ve been necessary storytelling pillars, but you find yourself checking your watch whenever they come up.

There’s no denying that Caro and the team are giving it their all, as much of the film is an interesting visual creation and excitably tries to rival the scope older classics. This project is clearly very important to Disney, otherwise they wouldn’t be taking such a huge creative step in bring Wuxia elements to Mulan. Despite the admirable effort, the script and thematic intentions needed more development. The result is a film with unique action and creative presentation, but it lacks charm and inspiration. 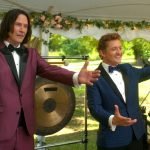