In the lead up to the awards season, there’s a whole host of films getting attention which may not have been on anyone’s radar. Sure, all the tentpole releases and star-studded Oscar bait gets noticed, but sometimes the truly fascinating gems manage to piggyback into the spotlight. In most cases, mainstream audiences don’t notice these films in the moment. Best Picture nominees like Whiplash (2014), Room (2015), Hell or High Water (2016) and Phantom Thread (2017) were overshadowed by their bigger counterparts, thus only gaining recognition through time and word of mouth. 2020 – 2021 has been an odd year, as the majority of the awards contenders would’ve been under the radar in any other season. Regardless, Lee Isaac Chung’s Minari (2021) probably would’ve stood out no matter what.

Set in Arkansas circa 1983, a family of Korean immigrants have moved from California to a new farmland property, a plan enacted by the patriarch, Jacob (Steven Yeun). This move is motivated by Jacob’s desire to grow Korean produce and sell it to vendors in Dallas, much to the dissatisfaction of his wife Monica (Han Ye-ri). While Jacob is optimistic about their future prospects, Monica worries this move will be a problem for their daughter Anne (Noel Kate Cho) and son David (Alan Kim), who suffers from a serious heart condition. Meanwhile, Monica’s mother Soon-ja (Youn Yuh-jung) comes to live with them all the way from Korea, putting more pressure on Jacob’s ability to provide and thus creating more tension between him and Monica.

As you can probably tell, Minari isn’t a typical drama, thriller or comedy, given its narrative deals with very domestic issues which don’t usually feel cinematic. This is probably why you don’t often see stories involving farming, as it’s typically a subject which puts people to sleep. Happily, director Lee Isaac Chung is keenly aware of that fact, thus he makes us care by allowing us to see the inner-workings of each character’s mind. We are made to understand Jacob’s desires, just as we are made to sympathise with Monica’s frustrations. This isn’t about whether or not the crops grow, but rather about what the growing of crops mean for this family, their interrelationships, and their personal self-worth. It’s not uncommon to have a family drama unpack such ideas, but few can blend plot, setting and character development this seamlessly.

In most cases, that level of narrative focus is achieved through a very rigid and streamlined point of view, meaning we usually only get one character’s perspective on things. Chung’s script pulls off a magic act by seamlessly giving us every character’s point of view without ever sacrificing the storytelling focus. In the space of one scene, we get to experience this world from the perspective of adults and children, which (incredibly) never feels confusing or unbalanced. In fact, the constantly shifting point of view adds depth to every situation and gives everyone fully realised motivations. There are no heroes, no villains, no protagonists or antagonists. These are just regular, sympathetic and likeable people doing their best with the hand they’ve been dealt.

With that in mind, it’s important to note how brilliantly the omniscient perspective allows Chung to unpack the thematic layers. Multiple levels of narrative complexity can sometimes sap the enjoyment out of films like this, as they distract from the main story and feel arbitrary to those not looking for it. However, there are plenty of viewers looking for complicated themes and will be disappointed without them, so it can be difficult to appease everyone. Happily, Minari rides the line of complexity and accessibility, managing to deliver powerful ideas as well as a delightfully engaging (and often hilarious) story. In-between the moments of humour and sweetness, themes of self-worth, culture and familial responsibility fill the margins.

That being said, the film’s artfully constructed yet accessible nature does mean there has to be moments which could be considered ‘set pieces’. This isn’t a bad thing by any means, as cinematic storytelling requires the characters to experience instances of extreme adversity. In an action film, this would be when the bomb goes off, whereas in a rom-com it would be when the lovers break up. Essentially, the final act needs some kind of heightened drama to give the viewer the impression that the characters have gone through a life-altering change. Minari certainly has a very effective and thought provoking climax, but some elements may come across as a contrived attempt to manufacture extra tension. Regardless, it doesn’t take away from the ending’s power.

As is to be expected, a story with this much narrative heft needs talented performers to deliver the goods. Happily, Chung has struck gold with this cast, including the likes of Han Ye-ri, Alan Kim, Noel Kate Cho, Will Patton, Scott Haze and Jacob Wade. There’s something very cathartic in seeing a diverse cast actually playing into that multiculturalism in a realistic fashion. They cross language barriers and cultural barriers, making the world of the film feel nicely unified without coming across as pandering. The standouts are without a doubt Youn Yuh-jung as Soon-ja and Steven Yeun as Jacob. Yuh-jung takes a well-worn grandma stereotype and makes it her own, transforming the archetype into a fully realised and highly endearing individual. Yeun is just as impressive, as he shoulders the weight of the narrative and all of the thematic complexity in a beautiful subtle performance.

I wonder if Minari would’ve been noticed at all in previous award seasons. If it had come out even two years earlier, it may have gone down in history as another criminally overlooked masterwork. It may have ended up a film which was superior to its peers, yet entirely ignored. Thankfully, Minari has been give a well deserved chance to be seen, appreciated and awarded for its many merits. Chung has delivered a special and memorable film which will hopefully outlast many others.

Best way to watch it: With a cozy blanket and a cup of soul-warming hot chocolate. 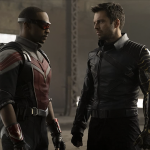 The Falcon and the Winter Soldier (2021) Miniseries Review