When it comes to long running franchises, there’s none quite as bizarre as Jurassic Park. It’s especially strange when considering it has maintained a level of success similar to Marvel, Star Wars or Indiana Jones, despite only having one great film across the entire series. The legacy of the original Jurassic Park (1993) is quite simply unassailable, as it is undoubtedly one of the most beloved, influential and enjoyable blockbusters in cinematic history. Part of what made Jurassic Park so brilliant was that it was a complete story: it put everything on the table, was smart for adults, fun for children, scary for everyone and left no narrative or thematic questions unanswered. That’s an impossible act to follow, yet they’ve tried five times. With Jurassic World: Dominion (2022), the franchise may be better off extinct.

Following the events of Jurassic World: Fallen Kingdom (2018), dinosaurs have been released all over the globe, which of course has irrevocably changed things. A Brontosaurus may just wander onto a construction site, or a Mosasaurus may just disrupt a fishing vessel. With the animals now affecting the natural law, the debate rages on as to whether or not they should be left alone or whether something should be done to contain them. However, we don’t have time to worry about that after a new biological terror has mysteriously emerged and is threatening the world’s food supplies. This prompts the return of Doctors’ Alan Grant (Sam Neill), Ellie Sattler (Laura Dern) and Ian Malcolm (Jeff Goldblum), reuniting for the first time since the original Jurassic Park. Meanwhile, Owen Grady (Chris Pratt) and Claire Dearing (Bryce Dallas Howard) are still fighting for dinosaur rights, having also taken Maisie Lockwood (Isabella Sermon), the cloned girl from the previous film, under their wing.

When all is said and done, the Jurassic films are the purest form of monster stories. We simply take a group of colourful characters and trap them in a hazardous place filled with giant, scary, and hungry creatures. The fact that these creatures are (mostly) all animals that did indeed walk the earth, is what makes these films hit a particularly striking nerve. The somewhat scientific realism cleanly allows for the deeper discussions around nature and humanities’ promethean tendencies, but ultimately the viewer is here to see the magic (and terror) of dinosaurs being brought back to life. Jurassic World: Dominion obviously delivers plenty of monstrous dinosaurs, but the overly complicated plot does stretch things incredibly thin, creating an awkward confluence of scenarios, action beats and moments which barely fit together.

To be clear, Jurassic World: Dominion isn’t an overly complicated story, but it’s structured in an overly complicated way. There’s at least three central macguffins, and four narrative threads, each with a handful of major plot revelations. Sadly, adding this many elements doesn’t help to make the film more engaging, but rather dulls the viewer’s interest and understanding of what’s happening. When you boil it all down and take away all the fluff, you end up with a story that’s actually the most simplistic of all the Jurassic films. In the grand scheme of things, it would’ve been better if Jurassic World: Dominion had kept things simple, as that would’ve resulted in a far more enjoyable experience. Not only that, but making the events clearer would also allow for the narrative themes and character emotions to ring true.

The convolution isn’t aided by the fact that nearly all the story elements are exceedingly stupid. Whether it’s the characters’ braindead decisions, or the completely outlandish plot logistics, nearly every story turn results in a cringe or an eye roll. No one is asking this film about dinosaur fights to be realistic, but it’s still important to make what’s happening on screen believable. There’s a significant difference between “believability” and “realism”, and it’s unfair to take points away from a film for not being real. If we held every film to that standard, we wouldn’t have films. You can create the most outlandish story, but it can be made believable if the plot doesn’t break its own rules or if the characters react to things in relatable ways. Unfortunately, Jurassic World: Dominion struggles with this, which in turn makes it difficult to get swept up in the escapism.

Despite this, Jurassic World: Dominion isn’t without merit. As far back as the original film, the Jurassic series has been at the forefront of cinematic visual effects. With that in mind, the blend of computer generated imagery and practical puppetry continues to be a joy, adding much needed flair to this otherwise lacklustre story. Even while the film delivers all the classic dinosaurs, there are a few new additions which help expand the film’s imaginative reach. This is most evident in how the new dinosaurs are utilised in certain tense moments, creating a handful of visually memorable sequences which will help the film stand out. Granted, not all of these flourishes escape the film’s narrative stupidity, but it’s something.

As far as the cast goes, it’s of course a thrill to see Jeff Goldblum, Sam Neill and Laura Dern back together, but you can’t help but feel like their talents are being wasted here. This is especially true of Dern, who has grown into one of the most charming character actors working today. Unsurprisingly, Goldblum is displaying all his trademark eccentricities exactly as you expect, while Sam Neill just seems like he’s happy to be along for the ride. Of the younger cast members, Bryce Dallas Howard’s role as Claire feels like more of the lead here than in the previous Jurassic World films, which (just like Dern) makes you wish she was giving her talents to a role worthy of her. Dallas Howard is a highly accomplished actor (and director), so it’s a shame to see her efforts put towards this. Chris Pratt’s work as Owen is dependable if rather disengaging, while newcomer DeWanda Wise adds some needed flair in-between the margins.

After so many disappointments, it’s hard to muster any shock or sadness over Jurassic World: Dominion’s failings. Ever since the first sequel, The Lost World: Jurassic Park (1997), the series has been able to maintain its hefty box office returns and passionate fandom, despite never matching the unmitigated quality of the original film. Therefore, the rather low standard Jurassic World: Dominion meets is merely the standard the franchise has been content to reach for a long time.

Best way to watch it: With earmuffs (so you don’t have to hear the script). 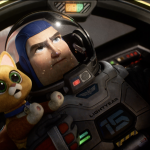