In its purest form, the art of filmmaking is about allowing the viewer to feel things. Granted, film is still an industry and therefore doesn’t thrive on artistic intent, but the people who actually make films are creative at heart, meaning their work does come from sparks of imagination. The business side and the artistic side don’t always see eye to eye, but that hasn’t stopped filmmakers from expressing themselves. For over two decades, no filmmaker has been more creatively expressive than Charlie Kaufman. Starting out as a writer with mind-benders like Being John Malkovich (1999), Adaptation (2002) and Eternal Sunshine of the Spotless Mind (2004), Kaufman eventually transitioned into directing with Synecdoche, New York (2008) and Anomalisa (2015). Each film was more bizarre than the last, thus it’s no surprise that I’m Thinking of Ending Things (2020) stays on brand.

We are introduced to ‘The Young Woman’ played by Jessie Buckley. Throughout the film she is given many names, including Lucy, Louisa, Lucia and Ames. She and her boyfriend Jake (Jesse Plemons) are taking a road trip on a stormy night so she can meet Jake’s parents, played by Toni Colette and David Thewlis. However, this is a strange time to meet Jake’s parents, as The Young Woman is battling with herself over whether or not she wants to stay in a relationship with him. Upon arriving at Jake’s parents house, things begin to unravel in a most unusual way. The Young Woman’s perception of reality (along with the viewer’s) completely warps, causing her to question everything she thinks, believes and knows about Jake and herself.

As you can probably tell, I’m Thinking of Ending Things is far from a traditional narrative. There is a mostly intelligible series of events, but they unfold in a dreamlike stream of consciousness. The deeper Kaufman gets into his story and characters, the deeper the audience falls down the rabbit hole. It’s not immediately apparent that this story is a full on acid trip, as Kaufman holds the viewer’s hand just long enough to get a sense of the characters and their existential struggles. It’s always a worry with these kinds of films that the further we go into the avant-garde, the more disconnected the we will be. Happily, Kaufman understands the need for the audience to relate, so the thoughts, feelings and emotions of the characters act as an anchor.

With that in mind, it’s impressive just how many abstract and emotional thoughts Kaufman fits into the film. As usual, Kaufman’s protagonist is incredibly thoughtful and self-reflective to the point of nihilistic depression. Every little thing is made to connect with ideas such as ageing, regret, loneliness, self-worth and the human spirit. Outside of the Lynchian sequences of introspection, the story doesn’t naturally houses those themes. Regardless, Kaufman is less concerned with telling a coherent story than he is with visually communicating his thoughts and emotions. The Young Woman, The Mother, The Father and Jake aren’t characters with arcs or with functions in a plot. Instead, they are the purest form of a storytelling device, wherein they function only as the emotive representations of thought-provoking concepts.

In that sense, it’s best to look at I’m Thinking of Ending Things as a piece of surreal artwork. This isn’t just because the narrative has no traditional form, but also because the many thematic ideas it wrestles with don’t seem to have a structure. In most surrealist films, there’s still a logic to the madness and an coherent interpretation for the viewer to reach. While there’s definitely some internal logic and recurring motifs, the final points are deliberately unclear. Once the credits role, the audience is frustrated, amazed, enlightened and confused by nearly every possible interpretation. Annoyingly, it’s an impossible puzzle, yet Kaufman has still managed to produce a mostly fascinating and experience. It makes little sense in terms of plot, but like a surreal art piece it will make every viewer feel something different.

It’s not without a few issues, despite being a deliberately nonsensical dive into existentialism. The insane sequences and their corresponding emotional beats hit a peak by the end of act two. By this point, the viewer is acclimated to the madness and ready for it to get even weirder. The introspection does slow down to give the viewer a break, but sadly the level of engagement also subsides. Once we enter the third act, things feel repetitive and lack the bewildering wonderment of the earlier sequences. Happily, the dreamlike presentation does resume for the climax, which is both fantastic experimental cinema and a head scratcher which even Kaufman’s biggest fans might say is too much.

For all of Kaufman’s bizarre tricks, none of it would work if it wasn’t for Jessie Buckley’s performance as The Young Woman. After all, she is the one who is ‘thinking of ending things’, so we are taking a trip into the recesses of her mind. Buckley plays The Young Woman with appropriate levels of shock, surprise and thoughtfulness. Her perplexity towards the strange events is made even better by her acceptance of them. It’s not easy to pull of a convincing emotional performance when the story is just a series of psychedelic nonsense, yet Buckley is the reason the film is imbued with any emotion at all. Similarly, Jesse Plemons as Jake is just as impressive. Most of the recognisable plot threads revolve around him, but he doesn’t let that stop him from showing off how surreal he can be. Toni Colette and David Thewlis also give dependably strong performances, but they are proudly outshone by the Buckley and Plemons.

I’m Thinking of Ending Things isn’t exactly the kind of film which is easy to recommend. It’s bizarre, it’s frustrating and at times it feels aimless. Even so, Kaufman’s strange mind is something truly unique to behold. It’s not a film I can enjoy in the traditional sense of the word, nor is it something I can love. Instead, I’m Thinking of Ending Things is a film that I deeply respect for staying true to its bonkers convictions. It’s not for everybody, but it is still a perplexing trip on the emotional spectrum.

Best way to watch it: Completely clean and sober. 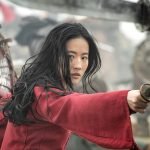