Kids from the 1980s had Star Wars, kids today have Marvel, and my childhood had Harry Potter. What made this franchise especially unique is that it never received any criticism for choking the film market, or for dulling the industry’s artistic integrity. Just like with Star Wars and Marvel, everyone and their mum would go see the next entry, but in Harry Potter’s case no one was shaming you for supporting the massive Hollywood film over a newly released original. You could argue that people were just glad that kids were reading books again, but it ran deeper than that. Harry Potter’s world was a near perfect mix of escapism, inspiration and relatable human emotion, so it made sense as to why the entire world was enamoured with it. Despite this, it was only a matter of time until Harry Potter (now called the Wizarding World franchise) became a cog in the studio machine, as is abundantly clear with the release of Fantastic Beasts: The Secrets of Dumbledore (2022).

Set directly after the events of Fantastic Beasts: The Crimes of Grindelwald (2018), we are reintroduced to Newt Scamander (Eddie Redmayne) the famed Zoologist, as he is assisting with the birth of a magical and important horse-like creature called a Qilin. This is interrupted by the reemergence of Credence (Ezra Miller), the misanthropic young wizard who previously aligned himself with the evil Gellert Grindelwald (Mads Mikkelsen). As Grindelwald’s army of followers and influence grows, Albus Dumbledore (Jude Law) enlists Newt, Theseus (Callum Turner), the muggle Jacob (Dan Fogler) and newcomer Lally (Jessica Williams) to confront him. This is especially difficult for Dumbledore, as Grindelwald is his former lover and a magical bond between them prevents him from fighting Grindelwald directly.

First things first, it must be noted that The Secrets of Dumbledore doesn’t have the strongest foundation to work with considering the below average results of the two previous Fantastic Beasts films. Where the main original Harry Potter series was blessed with a combination of passion, imagination and ambition, the Fantastic Beasts series has been plagued by a juxtaposing mix of low effort and over complication. The Crimes of Grindelwald was of particular note, as its narrative kicked off endless threads but achieved nothing with them. It was such a mess that the most memorable scene was an extended (and cringeworthy) exchange between all the named characters as they just yell their backstories to each other. This proves why scripts written with the structure of novels need a bit longer in the oven before they make it to screen. Thankfully, The Secrets of Dumbledore manages to streamline things for the cinematic medium, but that doesn’t make it any less convoluted.

This time around, the goal is clear and the plot is clear, but what isn’t clear is why any of these characters are even involved. Just like the main Harry Potter series, we have our ragtag group of heroes who are drawn together, look out for each other and are compelled to do the right thing. However, we were always given the opportunity to understand why Harry, Ron, Hermione and the rest felt so strongly about their heroic convictions and also why the conflict affected them on an emotional, psychological and personal level. Sadly, we haven’t been so lucky across this Fantastic Beasts series, which is especially frustrating as The Secrets of Dumbledore feels like it’s actively trying to assemble a team of loveable heroes. These characters are defined more by their abilities rather than their personalities, so it’s difficult to care when they are in peril. This is most apparent with Newt Scamander, who might just be one of the most meaningless protagonists ever committed to film. Outside of being the author of the canonical ‘Fantastic Beasts’ textbook, there’s no reason why he should be involved.

While most of the players are flatlines, Dan Fogler’s Jacob Kowalski continues to be the saving grace, as he is still the only main character with personality, quirks or personal stake in the narrative. Granted, his connection to the drama is a carry over from the previous film’s most trite plot thread, but in all fairness it does give the viewer something to care about on an emotional level. Yes, the resolution to Jacob’s arc makes the bulk of his struggle rather pointless, but it’s somewhat understandable as it’s clearly an attempt to correct the earlier film’s misguided choices. Annoyingly, this doesn’t make the resulting story thread any more enjoyable to watch, as it’s still a slightly frustrating backtrack.

With that in mind, it’s actually fair to call the entire piece a frustrating backtrack, as all the action, plot turns and reveals lead us to exactly the same thematic conclusion as the last film. The entire concept is about building up to the apparently epic confrontation between Dumbledore and Grindelwald, yet that epic confrontation is no closer to happening even after three films. You could argue that it took Harry Potter himself 8 movies until he finally defeated Voldemort, but each entry actually furthered his personal journey in addition to moving pieces on the board. By the end of The Secrets of Dumbledore, the characters are no better off than where they began, and they haven’t really learnt anything to take with them. The only notable changes to the status quo are tied to ancillary plot threads which we aren’t told enough about, thus making no significant impact. Not to mention that the plot mechanics of why these changes are happening threaten to break the internal logic of the whole Harry Potter universe.

On the plus side, there are some golden nuggets in the casting, as Jude Law and Mads Mikkelsen are engaging as Dumbledore and Grindelwald respectively. Sure, I’m still wondering why this younger Dumbledore eventually trades in his cool fitted suits for old and ragged robes, but Law is wonderfully charming as the famed headmaster. Mikkelsen is a revelation as Grindelwald, employing his signature brand of evil made famous with his turn as Hannibal Lecter. His steely eyes always put you on edge, yet his soothing and commanding voice somehow makes you want to be near him. As far as evil dictators go, you can really believe why this version of Grindelwald is both so alluring and terrifying. It’s just a shame that he’s not being used in a more engaging or interesting story.

There was something truly magical (pardon the pun) about the Harry Potter series. Its influence was so extreme that it practically defined a generation. Thankfully, no amount of lacklustre material, negativity or controversy, will ever dull our love of those original films. This is a good thing, considering that Fantastic Beasts: The Secrets of Dumbledore lacks much of the heart that made us fall in love with Potter’s world in the first place.

Best way to watch it: At 3am when you’re too tired to be dissappointed. 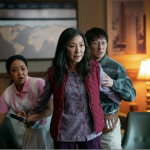 Everything Everywhere All at Once (2022) Review